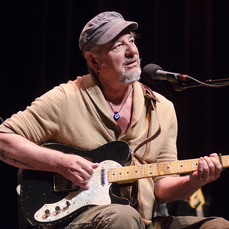 Greg Brown and I go back a long way, somewhere around four decades. Before Mountain Stage existed, I would sometimes do a National Endowment for the Arts program called Artist-in-Residence that included workshops in schools and a concert in the community. Iowa was a big participant in this program, and I went there many times. Of course, Iowa's favorite folk singer was Greg Brown, and he sometimes did the program, too. That's where we first met and where I first became an admirer of his rootsy, honest and subtly powerful style of songwriting and performing.
In the 1980s, Greg did a stint as a regular on A Prairie Home Companion, which, coupled with captivating live performances, helped share his homespun but sophisticated tunes and build a strong following around the world. Along the way, he's recorded a host of highly acclaimed albums and was honored by a women from the American folk music scene on Going Driftless: An Artist's Tribute to Greg Brown, which features Lucinda Williams, Ani DiFranco, Victoria Williams, Shawn Colvin, Mary Chapin Carpenter and Gillian Welch, along with his wife, Iris DeMent, and his three daughters, Pieta, Zoe and Constance. He also sang the original role of Hades on the first recording of Anaïs Mitchell's Hadestown, now a smash Broadway musical.
On this, his eighth visit to Mountain Stage, he sings and tells stories of gardening, his aching bones, a visit to his grandmother's farm house when he was a boy, Marilyn Monroe, Elvis Presley, John Wayne and the rich and varied mixture of humanity that makes up these United States. If you want to hear real some Americana, listen to this set.
SET LIST

Site Map | Help & FAQs | Privacy | Contact | Playlist | Public Inspection File | Public File Help
Copyright 2020 WXPN-FM / The Trustees of The University of Pennsylvania, All Rights Reserved
XPN.org is made possible with the generous support of XPN Members and our Business Sponsors.